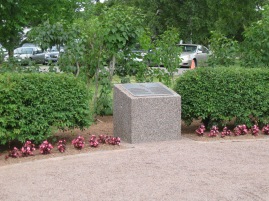 View of Charlottetown Harbour from the parterre

Rena McLean Memorial Garden was designed as a parterre, a quiet place for reflection.

My travels have not taken me to Prince Edward Island since starting this project, so I was pleased to accept Katherine Dewar’s offer of some of her photos of the Rena McLean Veterans Garden in Charlottetown.

Rena McLean is one of the nursing sisters featured in Katherine’s book, Those Splendid Girls. She joined the Canadian Army Medical Corps in 1914 and served with distinction in several venues. She was assigned to the hospital ship Llandovery Castle in March 1918. The ship was torpedoed on 27 June and 234 doctors, nurses and patients perished.

In 1917, the PEI Lieutenant Governor offered Government House and the surrounding grounds of Fanningbank for use as a convalescent hospital for injured soldiers returning from the war. The new hospital was named the Rena MacLean Memorial Hospital in 1919. With fewer recuperating veterans, it closed in 1920. The building was used as an agricultural and technical school until 1925. It then fell into disrepair and was eventually torn down.

Historical pictures of the hospital can be found on pp 158 and 160 of a 2014 Government House Historical Image Catalogue. (Warning: the link is to a large pdf document that may take a while to download.)

Fast forward to 2007. A formal parterre garden over the foundation of the hospital was dedicated as the Rena McLean Veterans Garden. In the words of garden designer Jean Riordon, “The simplicity of its design and plantings is symbolic of the tranquil environment offered to our returning soldiers.” (Reginald Porter, Government House and the Fanningbank Estate: A Guidebook, p 182) The dedication plaque says that “the garden provides a quiet and scenic place to remember those who have given, and those who offer, their lives in the service of their country.”

Thank you so much, Katherine, for sharing these photos.

Watch for an interview with Katherine Dewar later this week.

Welcome to new followers of Great War 100 Reads! Happy to have the pleasure of your company on this journey. I look forward to your comments along the way

Canadian crusader for equality and justice. Connoisseur and creator of the written word. Commemorating the centenary of the First World War in books and monuments. Read more at greatwar100reads.wordpress.com.

This site uses Akismet to reduce spam. Learn how your comment data is processed.