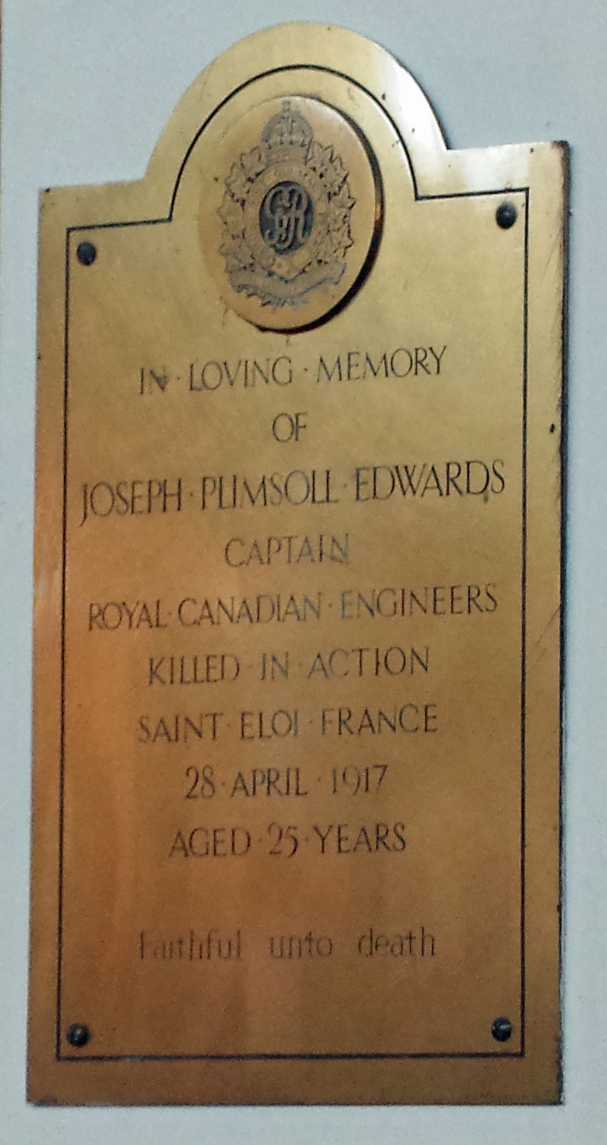 Joseph Plimsoll Edwards was born in Montreal on 30 September 1891, the fourth child (of nine) of Major Joseph Plimsoll Edwards and Emily Susan Crispo Edwards. His family moved to Nova Scotia when he was young. He graduated from the Royal Military College (Kingston) in 1912 and served with the Royal Canadian Engineers. END_OF_DOCUMENT_TOKEN_TO_BE_REPLACED 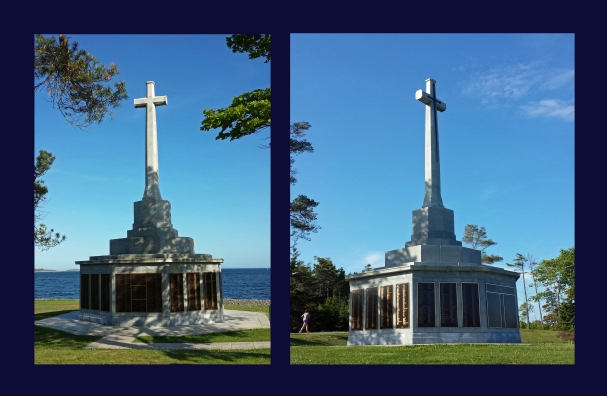 The Llandovery Castle served as a hospital ship during WW1, ferrying wounded soldiers from England back to Canada. On 27 June 1918, nearing the end of its voyage from Halifax, Nova Scotia to Liverpool, England, the ship was torpedoed by a German submarine off the Irish coast. The passengers rushed to lifeboats, but the submarine surfaced and destroyed most of the lifeboats. Only 24 survivors lived to tell the tale.

Amongst the 234 dead in Canada’s worst naval disaster of WW1: all 14 of the Canadian nursing sisters on board. END_OF_DOCUMENT_TOKEN_TO_BE_REPLACED 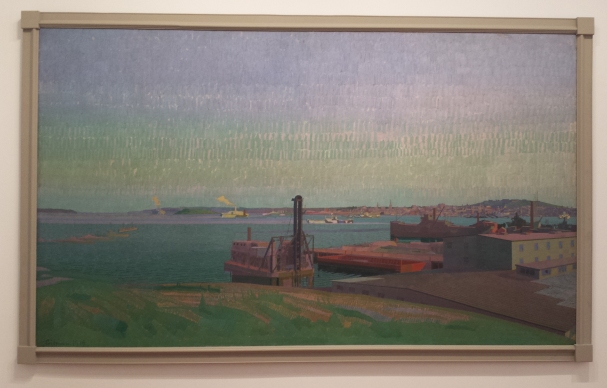 This Wednesday, 6 December, marks the 100th anniversary of the Halifax Explosion – the largest artificial explosion in history until the nuclear bomb surpassed it in 1945. Two ships – the Mont Blanc and the Imo – collided in Halifax Harbour, igniting the munitions carried on the former. END_OF_DOCUMENT_TOKEN_TO_BE_REPLACED 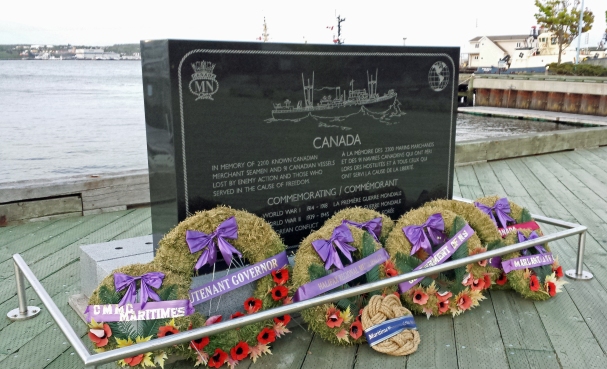 This Saturday, September 3, is Merchant Navy Veterans Day in Canada.

The Merchant Navy Memorial was dedicated on November 11, 1993 at Sackville Landing in Halifax, “in memory of 2200 known Canadian merchant seamen and 91 Canadian vessels lost by enemy action and those who served in the cause of freedom.” END_OF_DOCUMENT_TOKEN_TO_BE_REPLACED 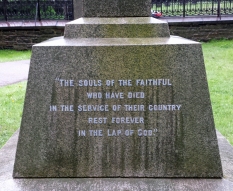 The souls of the faithful who have died in the service of their country rest forever in the lap of God. 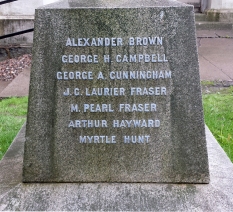 A Celtic cross in memory of “Her Heroic Dead 1914-1918” graces the north lawn of St Matthew’s United Church, on Barrington St at the corner of Spring Garden Rd in Halifax, Nova Scotia. Decorative Celtic knots form the cross. Major battle names – Ypres, Vimy, Somme, Mons – form the nimbus. The reverse side of the base assures us that “The souls of the faithful who have died in the service of their country rest forever in the lap of God.”

Fourteen parishioners are named on the monument, including three nursing sisters and at least one set of siblings. END_OF_DOCUMENT_TOKEN_TO_BE_REPLACED

Display of Books of Remembrance in Halifax Central Library

Page from the WW1 Book of Remembrance

October is Public Library Month in my neck of the woods. Great War 100 Reads bookends the occasion with the old Halifax Memorial Library and its Books of Remembrance, now moved to the new Halifax Central Library.

The new library does not retain the memorial element in its name, leading some Haligonians to fear that wartime sacrifices will be forgotten. That said, the Books of Remembrance and some other artifacts are now displayed next to the local history room in the new building. The books are digitized and searchable online. The library also offers workshops and research tools in its Roots to the Past: Lest We Forget.

The WW1 Book of Remembrance commemorates 1,360 men and women from Halifax County who gave their lives in the Great War. It was dedicated with the cenotaph in the Grand Parade on July 1, 1929. The lettering is a modified form of Gothic Textura with Lombardic capitals at the top of each page. Lettering was designed and executed by Nova Scotia book illuminator, Henry Perley Bernasconi.

Thanks to the librarians who gave me access to photograph the book. 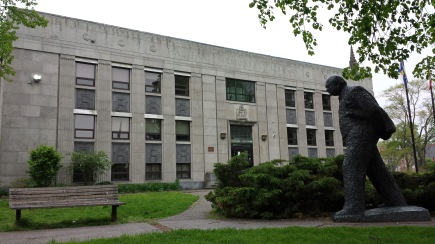 Winston Churchill ponders the fate of the old Memorial Library

October is Public Library Month in my neck of the woods. How better for Great War 100 Reads to mark the occasion than by featuring a library.

Some communities decided to honour those who served in the war with a building of practical use to serve the community. As memorials, these buildings have not always stood the test of time.

The Halifax Memorial Library in Grafton Park on Spring Garden Road opened on 12 Nov 1951 “in memory of those who gave their lives in defence of their country” in 1914-1918 and 1939-1945. By the 21st century, the building could no longer support the library’s needs for programming, technology, storage of the collections or accessibility. The library closed in Aug 2014 and the dramatic new Halifax Central Library opened across the street in Dec 2014. Several memorial elements moved to the new building. (Some of which will be featured in a later post.) The fate of the old building has not been determined.

Oscar Nemon’s statue of Winston Churchill was unveiled in front of the Halifax Memorial Library in January 1980. The image is said to be taken from a photograph of Churchill walking in Halifax. The 10 ft statue weighs 1.5 tons. 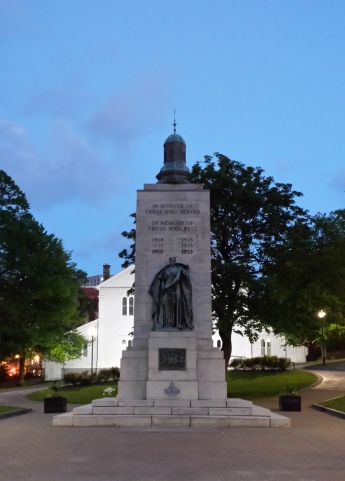 Wreath atop cenotaph best seen from up the hill

City Coat of Arms on shield 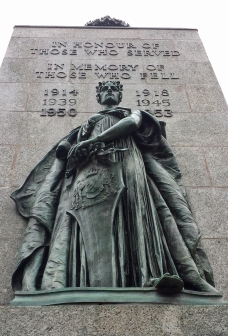 The cenotaphs in larger Canadian cities tend toward similarity with Edwin Lutyens’ design of the Whitehall cenotaph in London. Halifax is part of that trend. The cenotaph on the Grand Parade was dedicated on July 1, 1929 by Robert Borden, the Nova Scotian who was Prime Minister of Canada during WW1.

The cenotaph is cut from local granite. The bronze statue by Scottish-American sculptor J. Massey Rhind depicts a victorious but grieving Britannia representing Nova Scotian motherhood. A ceremonial wreath tops the cenotaph, with two more on the sides marking WW1 battles. The dedication is in honour of those who served and in memory of those who fell. Another dedication on the back notes that the names of the 1360 men and women killed in the war are treasured in the City Archives. The Books of Remembrance are now on display in the Halifax Central Library.

A Nova Scotia Archives photo shows the unveiling in 1929. Interesting photos and details of the major restoration in 2010 are on the Halifax Regional Municipality website.

Halifax Harbour in Nova Scotia was a busy port in WW1, a staging area for convoys of ships moving across the Atlantic. Trains arrived daily with troops and supplies for the war effort.

On the morning of 6 December 1917, the Mont Blanc (a French cargo ship) collided with the Imo (a Norwegian supply vessel) in the Narrows of the harbour. Haligonians watched the fire from the shore, not realizing that the Mont Blanc was loaded with munitions. The explosion and resulting shockwave killed almost 2000 people, injured over 9000, destroyed 1500 buildings and left over 12000 buildings uninhabitable.

The Halifax Explosion was the largest human-made explosion before the atomic bombs were detonated in 1945.

My day job recently took me to Halifax. Hugh MacLennan’s Barometer Rising came along. The novel is set in Halifax in the days before and after the Halifax Explosion. You can read the novel on several different levels.

Halifax, December 1917. Penelope Wain is longing for her love, who is also her cousin, Neil Macrae. Neil is assumed to be dead. Killed in the war two years ago under a cloud of suspicion for failure to follow orders. The orders of his commanding officer … his uncle … Penelope’s father, Geoffrey Wain. Turns out Neil is not dead. He has just snuck back to Halifax to find the one man who can clear his name.

Penny isn’t just moping around. She works at the shipyard. Just sold the British admiralty on the plans for a warship she designed. Nobody can believe it. A girl! Oh, turns out it was Neil’s idea. “All she had done had been to work out his principles in detail, to check figures of construction cost and the weights of various alloys, to estimate the ratio of horsepower to tonnage, and merge such pedestrian details with her own knowledge of construction and with Neil’s general plan.” (p 25) (Sounds like quite a lot to me.)

And what is Geoffrey up to? Profiting from the war, intimating that Neil’s perceived misdemeanors are the barrier to a more lucrative military staff position, scowling about the inferiority of his country. All in a pro-Empire way.

The City as a Character

Halifax itself is a character in the novel. The geography and atmosphere of the city play a critical role.

… as long as there were wars and she remained the terminus of the longest railway in the world, her back to the continent and her face to the Old Country, she would lie here in all weathers unchangeably the same, and her bells would ring in the darkness. (p 42)

The book is a good companion for a visit to the city.

Three forces were simultaneously created by the energy of the exploding ship, an earthquake, an air-concussion, and a tidal wave. These forces rushed away from the Narrows with a velocity varying in accordance with the nature of the medium in which they worked. It took only a few seconds for the earthquake to spend itself and three minutes for the air-expansions to slow down to a gale. The tidal wave travelled for hours before the last traces of it were swallowed in the open Atlantic. (p 196)

This is the start of two and a half pages describing the immediate devastation of the city from 9:05 to 9:10 am. Read it. Hard to imagine another account as lyrical as MacLennan’s.

Maybe someday you will rejoice to recall even this. (Robert Fagles translation)

The heroine is Penelope. The hero has left home, everyone think he’s dead. He loses his memory. He must regain it and fight seemingly unsurmountable obstacles before he can return. He hides his identity until the conditions are right to take his place again. Echoes of The Odyssey. MacLennan shows off his background as a classics scholar.

Chances are you’re reading a fable when someone’s quick response to a catastrophe is to philosophize at length about the future of Canada. Ultimately, Barometer Rising is an allegory of Canada turning away from its British colonial connections and building the consciousness of a new nation. References throughout the novel slap you up the side of the head. The explosion literally blows the old order to smithereens. Coincidences pile up to support the myth-making. (Of all the places Neil could go, he just happens to enter the building where he finds Geoffrey’s body.)

Barometer Rising was first published in 1941, as the world was enmeshed in another war. MacLennan’s ideas reflect a view of the time, that Canada would bridge the divide between the UK (old Empire) and the US (new power). Lots of CanLit ink has been spilt to analyse this more than I will here.

Many readers see Neil as the embodiment of the new Canada. I like to think that he and Penny together bring equally important qualities to the new vision.

You can read more about the Halifax Explosion here and here.