Every soldier tells a story. John Samuel (Jack) Brown was born on 16 November 1890 in Port Hope, Ontario, the second son of William Holmes Brown and Fannie Louisa Banks Brown of Quebec City. He graduated with honours from Bishop’s College in 1910, then taught classics in Rothsay Collegiate School in New Brunswick. In 1912, he entered medical school at McGill University in Montreal. END_OF_DOCUMENT_TOKEN_TO_BE_REPLACED 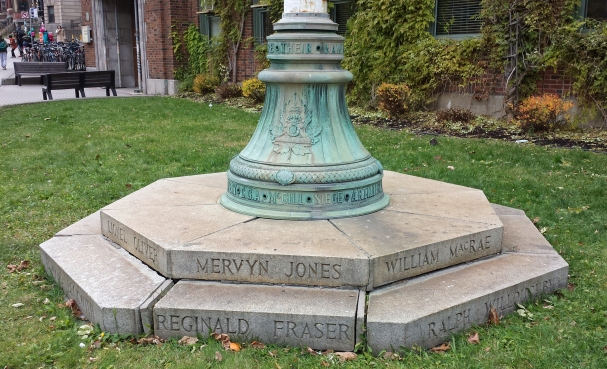 Flagpole base, in memory of 10th Canadian Siege Battery

Happy 2018! Have you resolved to get into better shape this year? Here’s a war memorial for you.

The Sir Arthur Currie Memorial Gymnasium is at 475, ave des Pins ouest, in Montreal. McGill University students were making good use of the facilities on the day I visited. END_OF_DOCUMENT_TOKEN_TO_BE_REPLACED

A stained glass window in the Redpath Library at McGill University is “in memory of 23 members of the McGill chapter of Delta Upsilon who gave their lives in the Great War.” END_OF_DOCUMENT_TOKEN_TO_BE_REPLACED

Canadian football fans (of which I am not one) are gearing up for the Grey Cup this week. Great War 100 Reads marks the occasion with a stadium named for a WW1 hero. Molson Stadium (Stade Molson) on the McGill University campus in Montreal is home of the Montreal Alouettes of the Canadian Football League as well as McGill teams. The Grey Cup game was played at the stadium in 1931.

Percival Molson is considered one of the great athletes in McGill’s history; he also left a legacy that built one of the landmarks of McGill’s downtown campus.

His sporting career was well underway by age 16: he played on the 1896 Stanley Cup championship Montreal Victorias. At McGill, he captained the hockey team in 1902-03, starred in track, racquet sports and football and won the Individual Trophy as the school’s best “all-round athlete” for three consecutive years, a feat unmatched in McGill sports history. He set a world record in the long jump at the American Athletics Meet in 1900.

He was renowned for his sportsmanship, and earned the unique distinction of never having been penalized in any sport for unfair tactics. After graduation, Molson became the youngest member to serve on the McGill Board of Governors, chairing its Finance and Stadium committees.

When the war started, Molson enlisted. He was wounded in the Battle of Sanctuary Wood on June 2, 1916, for which he received the Military Cross for gallantry and distinguished conduct in action. He came home to recover, but returned to France in 1917. He was killed in action on July 5, 1917.