It’s Labour Day in Canada and the US … a day to celebrate workers. Like other groups in society, many companies saw fit to memorialize their employees who had served in the war.

Toronto’s Union Station, at 65 Front St W between Bay and York, is the busiest passenger transportation facility in Canada. How many of the 200,000-300,000 daily travellers passing through stop to take in the memorial to Canadian Pacific Railway workers killed in WW1?

END_OF_DOCUMENT_TOKEN_TO_BE_REPLACED

British nurse Edith Cavell was executed on October 12, 1915 – 105 years ago today – for helping Allied soldiers escape occupied Belgium. Her death became a rallying cry for the Allies. In honour of Cavell, I invite you to revisit past posts showing the many ways in which she is memorialized.

END_OF_DOCUMENT_TOKEN_TO_BE_REPLACED 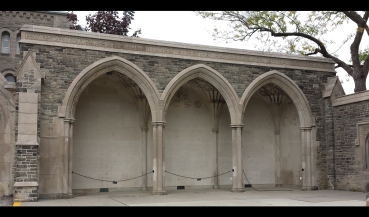 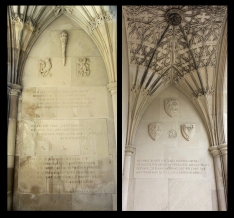 Each day, hundreds of people walk past the Memorial Screen in an arcade west of the Soldiers’ Tower on the University of Toronto’s downtown campus. Those pausing to look see the names, ranks and units of 628 university alumni, faculty, staff and students killed in WW1 – carved in limestone. END_OF_DOCUMENT_TOKEN_TO_BE_REPLACED

Murdoch Mysteries (Les enquêtes de Murdoch in France and The Artful Detective in the US) is a popular TV series featuring William Murdoch as a Toronto police detective in the late 1800s and early 1900s. The series is based on seven novels by Maureen Jennings. The novels went on hiatus when the TV series took off, and after 11 seasons the TV storylines have gone beyond the books.

A decade later, Jennings has published an eighth Murdoch novel, Let Darkness Bury the Dead. To avoid TV-vs-novel plot confusions, the latest book jumps ahead to November 1917. Murdoch is now a senior detective, widowed for many years. (His wife died giving birth to their daughter, leaving him alone with their young son.) Jack, now 21, is returning from France as a wounded soldier. His father longs to reconnect. But Jack is troubled and distant, more concerned about his friend and fellow veteran, Percy. Murdoch Sr is not his confidante of choice. END_OF_DOCUMENT_TOKEN_TO_BE_REPLACED 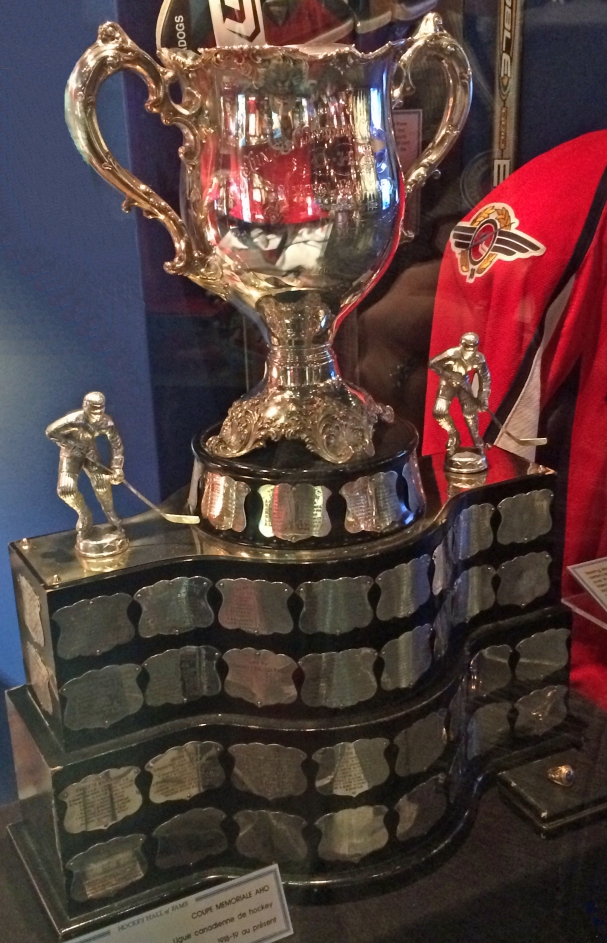 Memorial Cup, in the Hockey Hall of Fame

In hockey-obsessed Canada, it was inevitable that someone would decide to honour hockey players killed in WW1. The Memorial Cup was first awarded in 1919. It will be presented for the 100th time in May 2018. END_OF_DOCUMENT_TOKEN_TO_BE_REPLACED 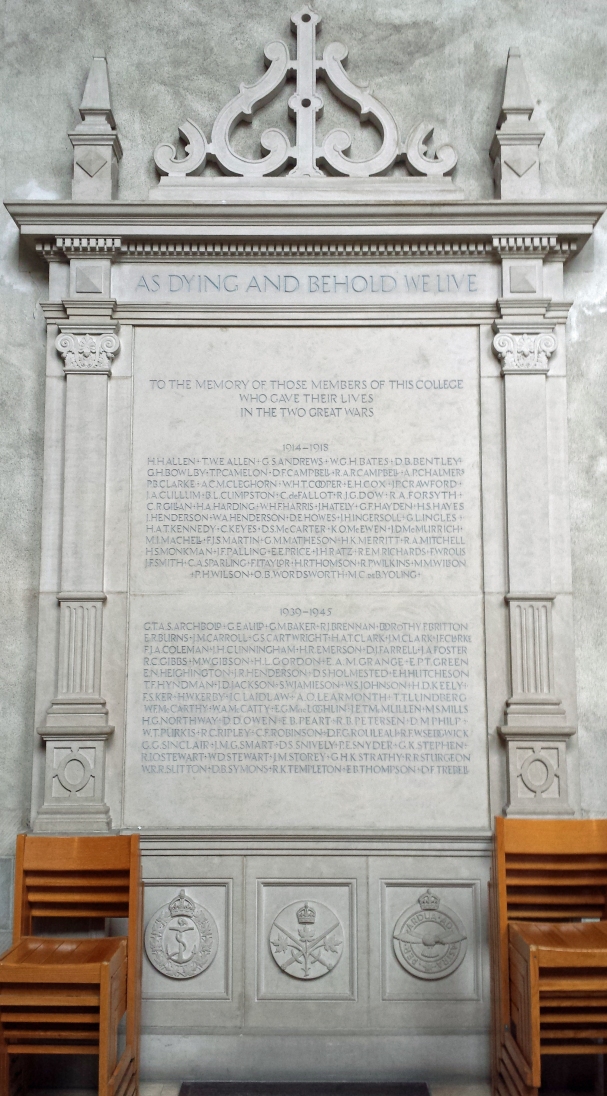 Enter the main building of Trinity College (6 Hoskin Ave on the University of Toronto campus) and turn left down the hall to the chapel, a quiet Gothic sanctuary in a busy city. Pass through the narthex, home to several tablets commemorating individual graduates, to the nave. There on the east wall is a carved stone memorial to those college alumni and staff who died in WW1 and WW2. END_OF_DOCUMENT_TOKEN_TO_BE_REPLACED 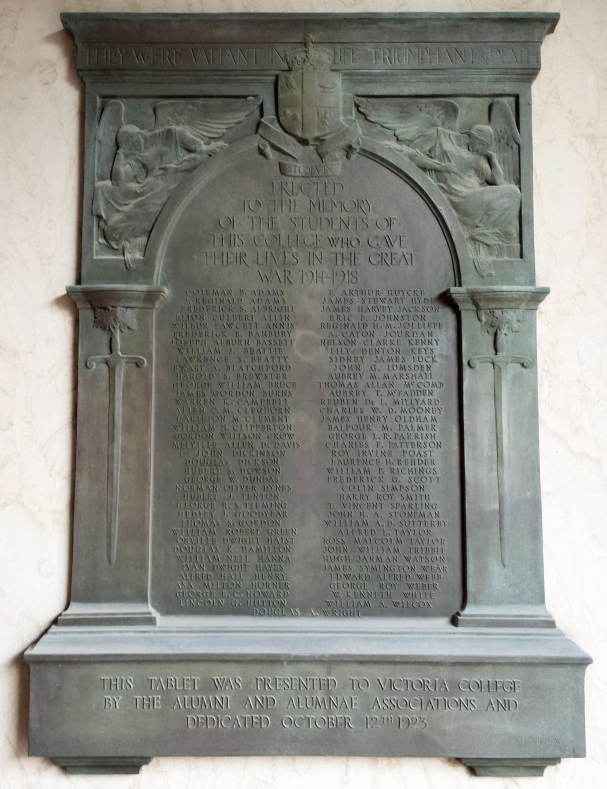 A bronze tablet on the right side of the main entrance to the Old Vic building on the U of T campus is dedicated to the memory of 75 Victoria College students and graduates who gave their lives in the Great War, 1914-1918. An angel mourns on either side of the college crest, under the assurance that “they were valiant in life, triumphant in death.” The tablet, designed by sculptor Alfred Howell, was presented by the Alumni and Alumnae Associations and dedicated on 12 October 1923. END_OF_DOCUMENT_TOKEN_TO_BE_REPLACED 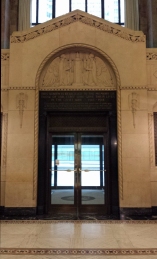 Screen to the memory of Canadian Bank of Commerce employees 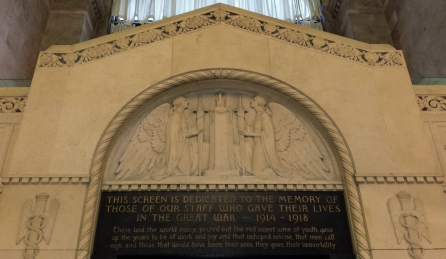 The 34-storey headquarters of the Canadian Bank of Commerce (now known as Commerce Court North) was the tallest building in the Commonwealth from 1931 to 1962. Built at a time when banks were temples, this art deco temple incorporates a memorial to bank staff killed in WW1. END_OF_DOCUMENT_TOKEN_TO_BE_REPLACED

April 9-12 marks the 100th anniversary of the Battle of Vimy Ridge, part of the Battle of Arras. On a snowy Easter Monday in 1917, the four divisions of the Canadian Corps fought together for the first (and only) time. Training and tactics won the ridge, but at the cost of about 3,600 Canadian lives. END_OF_DOCUMENT_TOKEN_TO_BE_REPLACED 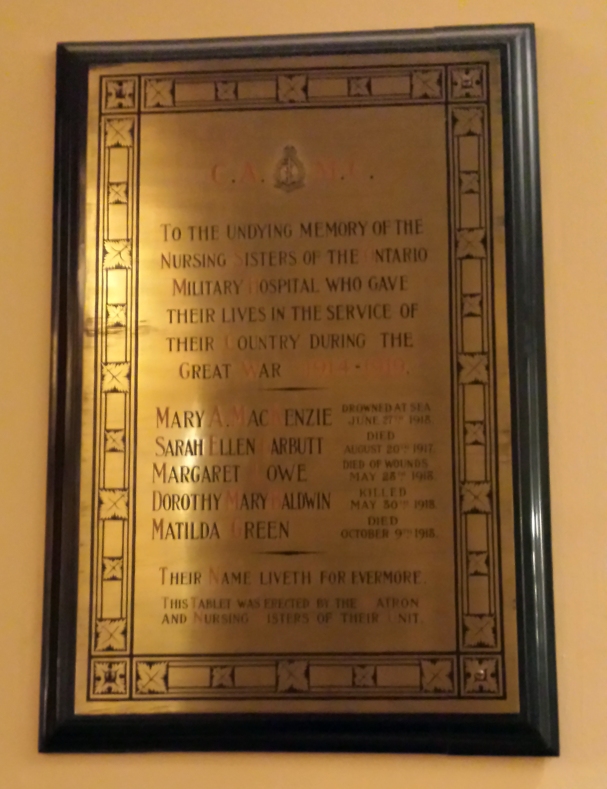 Mary A McKenzie, Sarah Ellen Garbutt, Margaret Lowe, Dorothy Mary Baldwin, Matilda Green. These five women are remembered on a brass tablet in the Ontario Legislative Building (Queen’s Park), on the second floor of the west wing, near the landing outside the Legislative Chamber. They were nursing sisters who had served in the Ontario Military Hospital at Orpington, England, and who died during the war. END_OF_DOCUMENT_TOKEN_TO_BE_REPLACED