Another week of war memorials close to home, this time in West Quebec.

Memorial Park/Parc commémoratif – framed by rue Principale, rue Park, rue Symmes and rue Broad in Aylmer, Quebec – has been the town’s market square since 1843. In 1921, a war memorial was erected in the square, dedicated to those in the community who died in WW1. Funds for the memorial were raised by the local chapter of the Imperial Order Daughters of the Empire (IODE).

END_OF_DOCUMENT_TOKEN_TO_BE_REPLACED

Cross of Sacrifice stands next to Guelph Central Station

The cenotaph in Guelph, Ontario had a long gestation period after the end of WW1. A War Memorial Association was struck in 1921 and a plebiscite on the preferred location was held in 1922. Then money and politics delayed the project until 1927.

In the meantime, the local chapter of the Imperial Order of Daughters of the Empire – IODE – got on with their own memorial plans. They dedicated a Cross of Sacrifice in May 1925, next to the Guelph railway station on Carden St at Wyndham St. The Canadian National Railways donated the land. END_OF_DOCUMENT_TOKEN_TO_BE_REPLACED

Dedicated to Albertan men who died in the Great War

The First World War Memorial faces 2nd St SW, between 12 Ave SW and 13 Ave SW, at the east end of Calgary’s Central Memorial Park – not to be confused with the cenotaph at the west end of the park. The monument was sponsored by the Col MacLeod Branch of the IODE at a cost of $5500. It was dedicated in June 1924 “to the imperishable glory of the men of this province (Alberta) who fought and died for their King and Country in the Great War.”

Originally called the Victory Statue, the monument is comprised of a bronze statue of an infantry soldier by Montreal sculptor Coeur de Lion MacCarthy mounted on a pedestal of Bedford stone. An article in the 21 June 1924 Calgary Daily Herald describes the statue as “a young Canadian soldier exultant over news of the signing of the Armistice. With uplifted rifle he stands, bareheaded, the attitude denoting victory and exaltation.”

Canadian war memorials that celebrate victory are not the norm. Most pay tribute to sacrifice, suffering, honour and grief.

As an aside, the Woman’s Community Interests page in the Calgary Daily Herald linked above also previews the upcoming cat fashion show (precursor of today’s pervasive cute cat videos?) and advertises “if every man had to do the washing every home would have a Maytag.”

More names of those who were killed or died from wounds

Tommy in Greatcoat is another monument designed by Emanuel Hahn and executed by the Thomson Monument Company. This version is in Victoria Park in Moncton, facing John St between Weldon and Cameron. It was erected by the local chapter of the IODE and dedicated in 1922.

The bronze figure stands on a granite base carved with the standard names of those killed and battles in which they fought. Black granite “books” were added on three sides at a later date, to mark WW2 and the Korean War.

One nursing sister is listed amongst the soldiers. Ruth Esther McKay was born in Moncton in November 1891. She graduated as a nurse in 1916 at the Winnipeg General Hospital. She enlisted as a nursing sister in March 1917. The January 1921 edition of The Canadian Nurse marks her death: “Miss Ruth McKay (WGH 16), at Albany NY, of septicemia following an operation for appendicitis. 1920” (vol 17, p 119)

Another Tommy in Greatcoat can be found in Lindsay, ON. As with other popular Hahn statues, several imitations in other locations borrow heavily on the design.

Names on north side of monument

Names on south side of monument 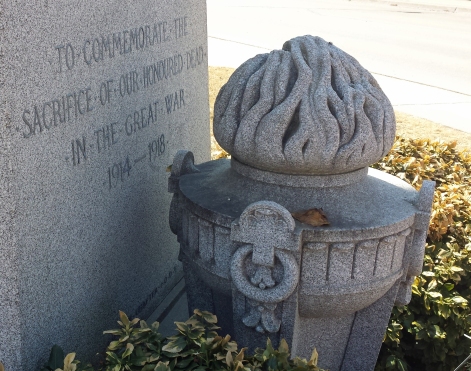 Is the Grieving Soldier, sometimes called In Flanders Fields, the most popular war memorial in Canada? You might think so, given the number of communities in which it (or some facsimile) stands.

This one in Hanover is in front of the public library at the corner of 10th St and 10th Ave. A project of the local International Order of the Daughters of the Empire (IODE), the library board and the town council, it was dedicated in 1922.

The Grieving Soldier was designed by sculptor Emanuel Hahn, then a monument designer for the Thomson Monument Company of Toronto. Bronze casts from Hahn’s original sculpture are in Cornwall, ON and Westville, NS. Granite versions were carved by other stone carvers at Thomson, following Hahn’s model. In addition to Hanover, copies are found in towns in Quebec (Gaspé), Ontario (Bolton, Milton, Petrolia, Thunder Bay), Manitoba (Russell) and British Columbia (Fernie). Imitations and influences created by other companies abound in other communities.

If you live in Canada, or if you have ever visited here, you’ve likely carried Emanuel Hahn’s work in your pocket. He designed the caribou on the quarter and the Bluenose schooner on the dime.

Monday Monuments and Memorials started as a way to ensure regular posts on this blog. My reading habits can make the timing of book reviews haphazard. But I can count on a weekly photo.

It has become a popular feature on Great War 100 Reads … for you and for me. I take an expansive view of what belongs – statues, cenotaphs, plaques, grave markers, sculptures, ephemera and many other remembrances of the war. I seek them out in my travels. Sometimes they present themselves to me out of the blue.

I’ve picked up some books about war memorials to learn more, and will review them over two posts.

To Mark Our Place: A History of Canadian War Memorials documents many of the monuments built to honour Canadian soldiers. Robert Shipley’s 1987 book does not claim to be exhaustive, but he probably lists the majority of Canadian monuments in the country and abroad. While it covers the range of conflicts, the focus is on WW1 monuments. It was, after all, the first war with so many Canadian casualties.

Before Shipley’s book, there had been no close study of Canadian war memorials. Critics dismissed them for lacking sophistication and artistic merit. But Shipley argues that “While they speak of the dead, they speak to the living about things that are important in life. And while they were built after wars, mostly wars fought far away, they are products of this country and they are celebrations of peace.” (p 20)

Shipley recounts how communities came together after WW1 to plan, raise money for and build the memorials. With the need to reach consent amongst the committees and the wide subscribing public, it is no wonder that the monuments are not on the cutting edge of art. They follow ancient forms and European models. But they also incorporate Canadian symbols – most notably maple leaves (for Canada) and caribou (for Newfoundland). Great importance was given to inscribing the names of battles in which the members of the community had fought.

Women’s groups like the Imperial Order of Daughters of the Empire (IODE), Women’s Christian Temperance Union (WCTU) and Women’s Institute (WI) were often at the forefront in monument committees. Shipley notes “The prominence of women in memorial movements after the First World War was part of the growth of women’s involvement in all aspects of our society.” (p 57)

Sarah Glassford and Amy Shaw point out in their conclusion to A Sisterhood of Suffering and Service that the war memorials contribute to a narrow view of how the war is remembered: “Despite their very tangible presence in the war, in its public commemoration women remain largely ephemeral, passive and silent – ideals, or idealized mourners, rather than flesh-and-blood workers for the nation at war. The nearly universal absence of women and girls from these war memorials, save as allegorical figures, both represents and has contributed to the popular memory of the war as a male endeavour.” (p 320)

Of the books I’ve read, To Mark Our Place is the most rigorous in its analysis of war memorials. His listing of the monuments is a helpful starting place to find the communities where they reside. But my explorations must be more resourceful to find tributes beyond those to fallen soldiers.

The Cross of Sacrifice was erected in Kingston in 1925, through the work of local chapters of the Imperial Order of the Daughters of the Empire. It is the site of Kingston Remembrance Day ceremonies, located on the south side of King St at Geroge St near the Lake Ontario waterfront.

The monument is made from granite with a bronze sword fixed on the front. The pattern was designed by Sir Reginald Blomfield for Crosses of Sacrifice in Commonwealth war cemeteries. (You can see one in Ottawa’s Beechwood Cemetery here.) The dedication is “to the glory of God and in proud and loving memory of those Kingston men and women who gave their lives in the Great War.” Unusual, in that it notes women as well as men.

Following WW1, the IODE was responsible for many memorials in Canada. When the local chapter of IODE closed in the 1950s, the Princess of Wales’ Own Regiment became stewards of the monument.

The memorial was rededicated in 2014 after extensive restoration. From a City of Kingston press release: “The memorial was showing wear and tear from the weather and vandals: mortar between the stones had deteriorated, the granite stones around the base had shifted out of place, the stones were stained from exposure to the elements and pollutants, and the sword was discoloured and had a bend in it from vandals attempting to pry it off.”

Thanks to Vicki, host, driver, guide and chief snow remover on this tour.

Rare monument to recognize women as well as men 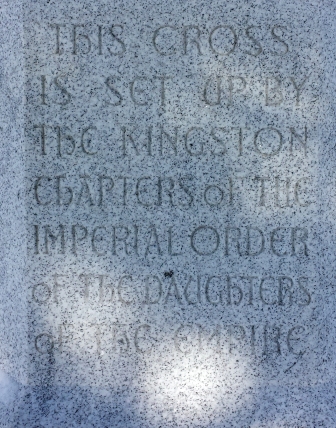