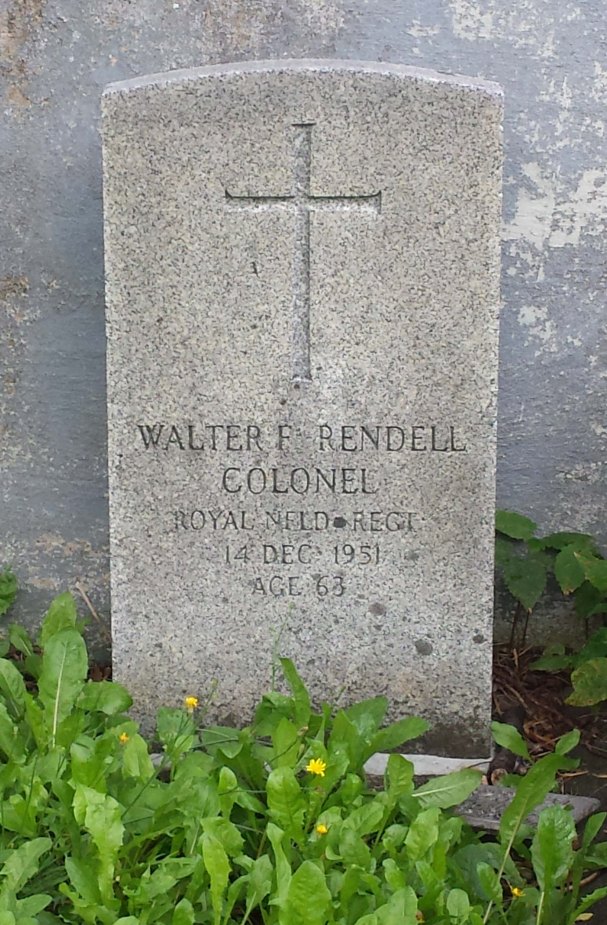 July 1 is Memorial Day in Newfoundland and Labrador, a solemn day of remembrance of the single greatest disaster in Newfoundland history. At Beaumont-Hamel, the Newfoundland Regiment was virtually wiped out in half an hour on the first morning of the Somme Offensive, July 1, 1916. All the officers were killed or wounded. On one of the bloodiest days of the war, only one other battalion had a higher casualty rate.

And what of those who served and returned? Each soldier tells a story. END_OF_DOCUMENT_TOKEN_TO_BE_REPLACED 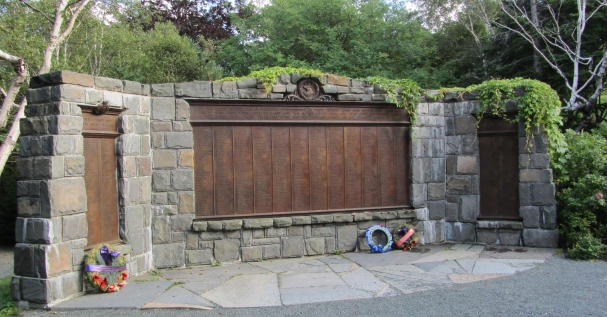 July 1 is Memorial Day in Newfoundland and Labrador, a solemn day of remembrance of the single greatest disaster in Newfoundland history. At Beaumont-Hamel, the Newfoundland Regiment was virtually wiped out in half an hour on the first morning of the Somme Offensive, July 1, 1916. Of the 780 men who went forward, 233 were dead, 386 wounded and 91 reported missing (later assumed dead) – a he casualty rate of 90%. All the officers were killed or wounded. END_OF_DOCUMENT_TOKEN_TO_BE_REPLACED 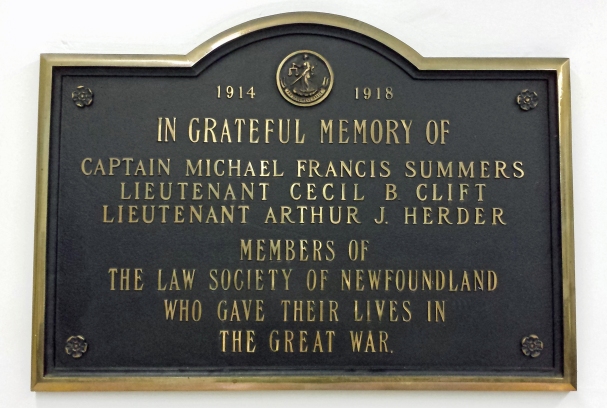 A plaque in the Supreme Court of Newfoundland and Labrador at 309 Duckworth St in St. John’s is dedicated in grateful memory of three members of the Law Society of Newfoundland.

Lawyer M. Frank Summers and student-at-law Cecil Bayly Clift were amongst the First Five Hundred in the Newfoundland Regiment, sailing across the Atlantic in October 1914 on the SS Florizel. Both served in Gallipoli, then moved to the Western Front. END_OF_DOCUMENT_TOKEN_TO_BE_REPLACED 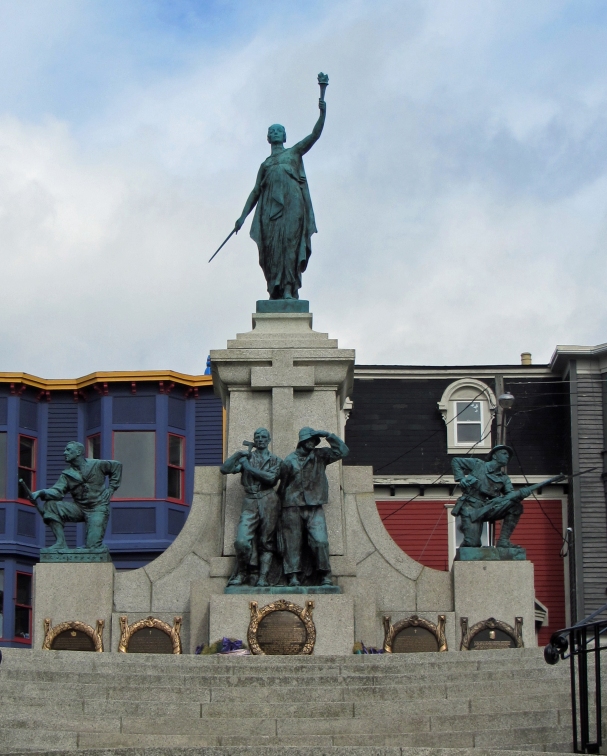 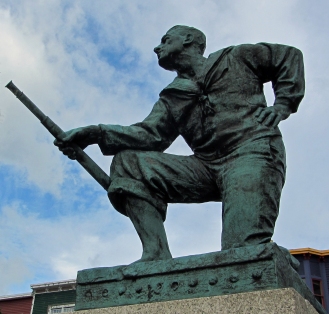 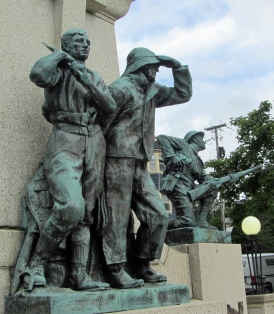 Memorial Day, July 1, is a solemn day of remembrance of the single greatest disaster in Newfoundland history. At Beaumont-Hamel, the Newfoundland Regiment was virtually wiped out in half an hour on the first morning of the Somme Offensive, July 1, 1916. Of the 780 men who went forward, 233 were dead, 386 wounded and 91 reported missing (later assumed dead). While the casualty rate for many battalions was over 50%, for the Newfoundland Regiment it was 90%. (Some reports say more went over the top, with a result of 85% casualties. But still …) All the officers were killed or wounded. On one of the bloodiest days of the war, only one other battalion had a higher casualty rate. END_OF_DOCUMENT_TOKEN_TO_BE_REPLACED 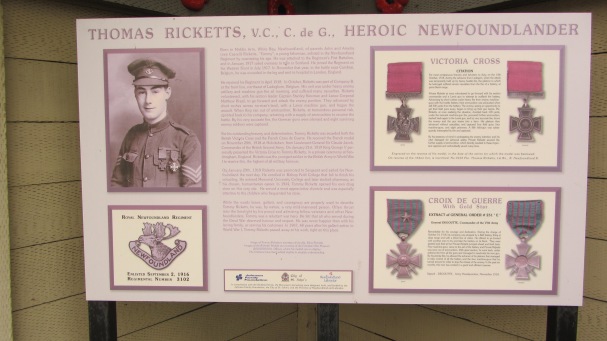 Tommy Ricketts left his birthplace, an isolated fishing hamlet, to answer the clarion call of the Royal Newfoundland Regiment in September 1916. He claimed to be 18 years old. He was 15.

Two years later, a seasoned soldier and still underage, Ricketts’ action in battle earned him the Victoria Cross. As described in the citation: END_OF_DOCUMENT_TOKEN_TO_BE_REPLACED

A comment on last Monday’s memorial to the Broad brothers at Calgary’s Central United Church got me thinking about how communities came together to show respect to those who had served in the war.

It seems that it was many years after the war before plaques were erected. In this case, 1923. Is there any explanation of the delay between the end of the war in 1918 and these expressions of remembrance? Did people, at first, feel their grief so profoundly that they could not think of things like plaques and statues? Was commemoration encouraged by the government or Church in the 1920s and we are seeing the results of that? 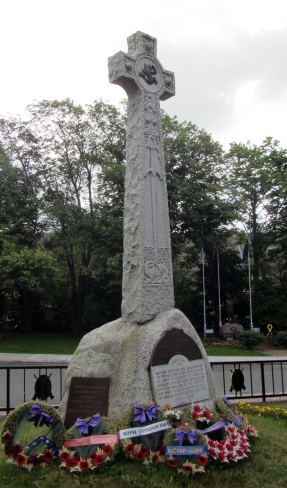 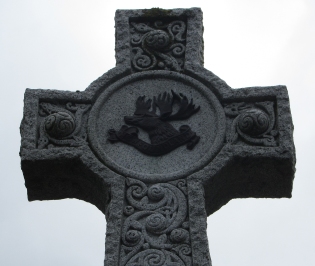 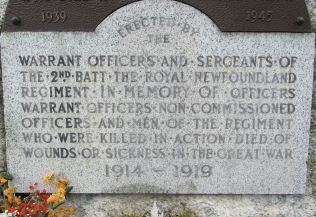 This Celtic cross was erected at Queen’s Rd and Cathedral St (now in a traffic island) by the sergeants and warrant officers of the second battalion of the Royal Newfoundland Regiment. The original monument marks WW1. Brass plaques were added to mark later wars. You can see a newer peacekeeping monument is in the background.

The earliest monument to be erected in St. John’s, other than tablets in the churches and schools, was the Sergeants’ Memorial, a fine Celtic cross of Scottish granite on the base of Newfoundland granite, standing on Queens Road at the foot of Garrison Hill. … The Memorial was unveiled by Sir Alexander Harris on July 1, 1921, and for the next two years it was the centre of the Commemoration Day ceremonies. 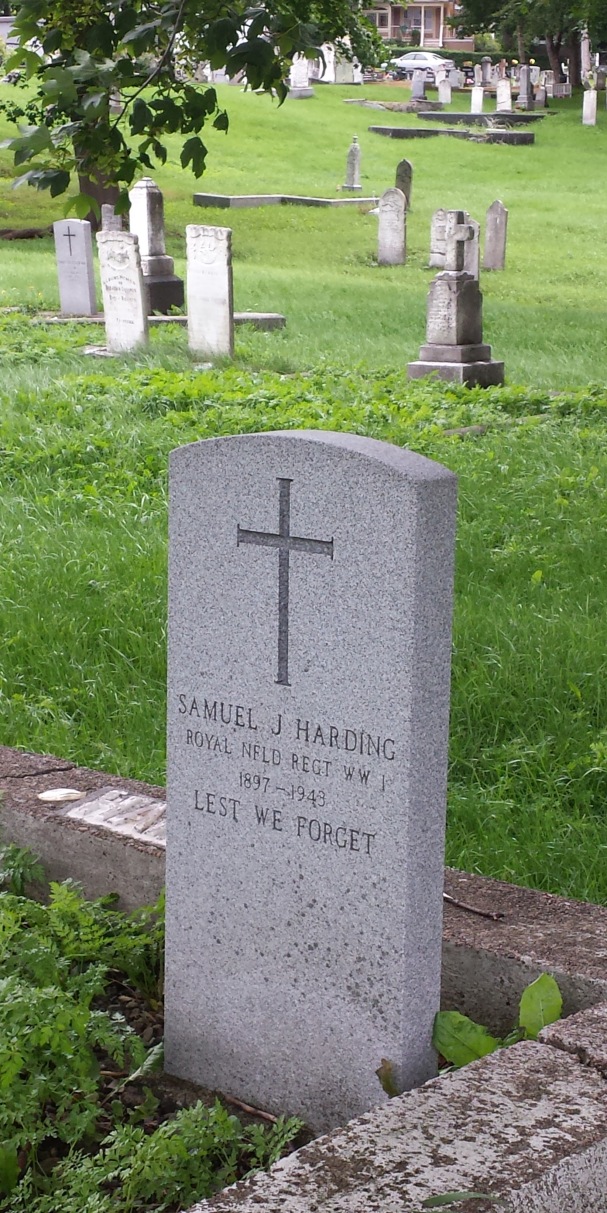 Each soldier has a story.

Samuel J Harding was born in Greenspond, Bonavista Bay, Newfoundland in 1897. He enlisted in the Newfoundland Regiment in February 1916 at age 19. His trade was listed as a school pupil. He was wounded in action and discharged as medically unfit in May 1917. A March 1917 medical report from the third London General Hospital states:

He was on a fatigue party when a shell exploded near to him and damaged his right eye. He did not go sick. Later on he was hit in the left foot by a pick, accidentally. He went sick in August 1916, and was admitted here in August and discharged in October 1916. He rejoined Depot in Ayr(?) and did light duty until December 1916. He went back to General Services in France, but had to report sick on 2nd Mar at Combles, after he had been blown up by a shell. Then taken to 5th General Hospital, Boulogne and thence here.

The Rooms (Newfoundland and Labrador’s Provincial Archives, Art Gallery and Museum) has an online database of the military files of over 2200 soldiers* from the Royal Newfoundland Regiment who served in WW1. The files are searchable by name or by community.

*  August 2016 note: The Rooms is currently updating its database. Files previously found online may be temporarily unavailable. Names previously not included will become accessible. They advise researchers to revisit the site over the coming year to determine if the file they seek has been uploaded. 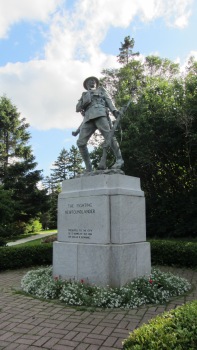 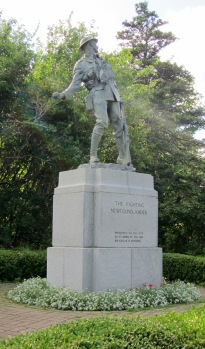 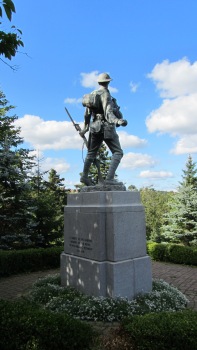 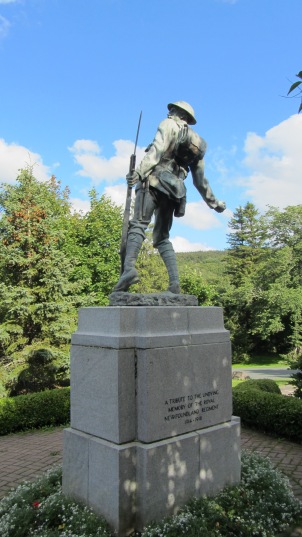 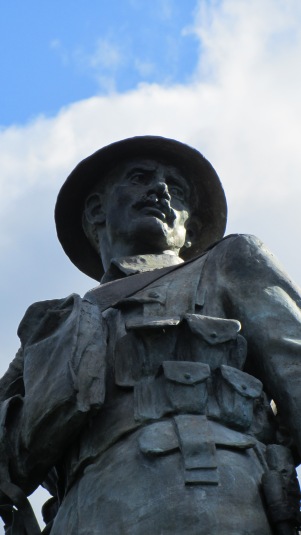 The Fighting Newfoundlander stands in Bowring Park, St. John’s, NL, as “A Tribute to the Undying Memory of the Royal Newfoundland Regiment 1914-1918.” British sculptor Captain Basil Gotto also sculpted the Caribou Monuments. Corporal Thomas Pitman posed for the statue. A survivor of the 1916 Battle of Beaumont-Hamel, Pitman received the Distinguished Conduct Medal (DCM) and the Military Medal (MM). The statue was unveiled in 1922.

Scroll down in the history of Bowring Park for the story of how Pitman came to pose for the statue and the lifelike details that Gotto captured. 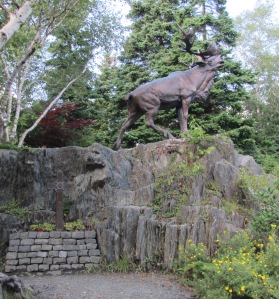 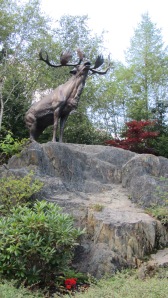 The caribou is the Royal Newfoundland Regiment’s emblem. 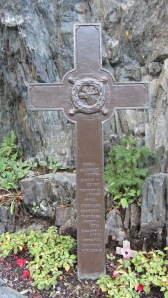 The Caribou Memorial in Bowring Park, St. John’s NL is one of six. The other five caribou mark sites in France and Belgium where the (now) Royal Newfoundland Regiment fought: Beaumont-Hamel; Gueudecourt; Masnières; Monchy-le-Preux and Courtrai (Kortrijk). The caribou is the emblem of the Regiment. A brass cross below the St. John’s caribou lists the major arenas of the Regiment’s battles.